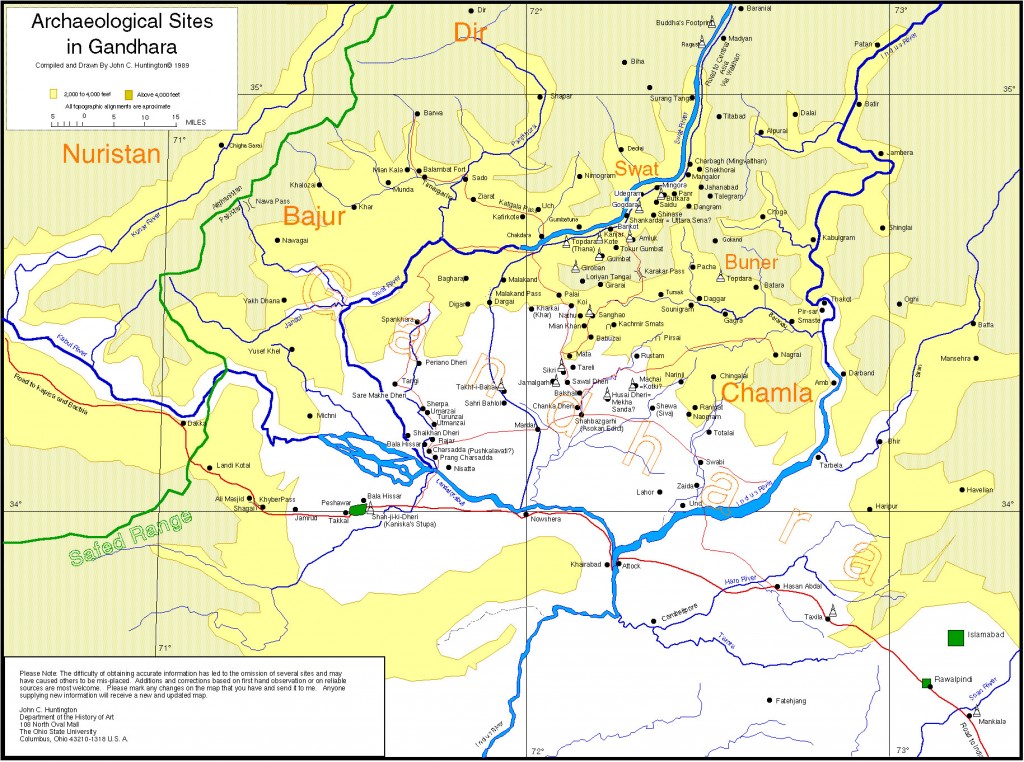 With the “retrograde” removing foreign troops from Afghan soil we move closer to the time when the last intact remnants of the Gandharan culture will vanish so that the copper lying below ground can be extracted.

It was not too long ago that manuscripts from this area were unearthed by looters and found to be the oldest Buddhist manuscripts by a considerable margin. Scholarly examination noted that the first century CE sutras did not move research any closer to the original words of Shakyamuni. While these discoveries are the oldest surviving manuscripts in South Asia, they still follow five-hundred years of oral transmission of his teachings and are a product of Gandhara where they were produced. Though much older they do not represent teachings closer to what the Buddha taught but show us another lineage path from the oral transmission presented in eastern India.

Once again Tricycle magazine provides an excellent discussion of the meaning of these discoveries;

Whose Buddhism is Truest?

It is curious that Tibetan Buddhism owes its Buddhist heritage to this region. Padmasambhava brought Buddhism to Tibet in the eighth century from the Swat Valley in what is now Khyber Pakhtunkhwa, Pakistan. The path of Buddhism to Tibet was by way of Gandhara.

For a summary of the remaining vestiges of Buddhist culture in the area that was once Gandhara, we again return to Tricycle magazine for their latest update on Mes Aynak;

The Fate of Mes Aynak

Below the Buddhist relics found at the site there is thought to be another city dating back five-thousand years. Nothing from that time is likely to be examined by archaeologists when China lays claim to what is said to be one-hundred billion dollars worth of copper deposits. The copper will be extracted in open pit fashion.

I enjoy the international edition of Radio World not only for material from their own staff but for links to articles from a diverse range of sources . . . like this from Radio Free Europe/Radio Liberty.

It is funny how dated the name RFE seems these days. It has been a number of years since Churchill’s phrase, “the iron curtain” was an apt description of the division within Europe.

I keep looking for more details on the bill introduced in the Senate which included language to extend and expand the Afghan Allies Protection Act of 2009. Arizona Senator John McCain and Jeanne Shaheen from New Hampshire are sponsors of this legislation. This is the latest I have seen in print on AAPA progress – from 23 June in the Wall Street Journal;

The November-December 2010 edition of the Thomas Cook Overseas Timetable marked the publication’s thirtieth anniversary and was the last one to see print. Only recently have we see the start of any Afghan international rail connection as rail is laid to connect Turkmenistan and Afghanistan..

Perhaps this will provide some compensation for those who still mourn the passing of the Thomas Cook reference. It is curious that the rail connection is to the north. Laying tracks south or east could make for a connection on the extensive South Asian system put in place by the British. Rail line to the west would make for a very direct connection to Europe and the Atlantic.

Still, it is nice to see Afghanistan getting involved with rail transport even though it is too late to see a listing in Thomas Cook. We can now speculate on when tickets will be available for the Ashgabat International Express.

Tolo filed these notes last month at the time of the inauguration ceremony for the project;

A number of members of Congress have commented on the sorry state of affairs in the processing of Special Immigrant Visas issued under the Afghan Allies Protection Act of 2009. They did so in a letter to US President Barack Obama.

If you see your representative’s name as a signatory, a note of thanks would be appropriate. If you don’t, a mention of this letter might be appropriate if you send any correspondence promoting support of the AAPA.

It is nice to see attention given to the issue of immigration for interpreters and others supporting the ISAF mission in Afghanistan. It will be nicer when the headlines remark on the successful completion of the process;  as those who have placed themselves at risk are provided with safe haven in a country they have assisted.

Afghanistan’s broadcast spectrum is a mess. The rush to get radio and television signals on the air after the fall of the Taliban crammed more signals than could be accommodated into the available spectrum. Things were done in too big a hurry to allow for careful planning. Instead, shoehorning in all the new licensees was the procedure, particularly in Kabul which remains the center of business development in the country and the largest market by a wide margin.

Broadcast licensing is a two Ministry function in Afghanistan. The Ministry of Information and Culture passes judgement on the suitability of the applicant after receiving assurances from the prospective broadcaster that the intended programming will not violate cultural norms or run contrary to Islamic values. From the MIC comes what is usually called a broadcast license.

The Ministry of Communications and Information Technology is the other Ministry. Here the Afghanistan Telecommunication Regulatory Authority (ATRA) authorizes spectrum space for the broadcaster. This is called the frequency license.

When commercial broadcasting returned as the Taliban departed it seemed that everyone had a reason to want to become a broadcaster, most particularly in Kabul. There was no structure for competitive bidding for licenses defined in a table of allocations. Licenses were granted to the point of frequency congestion and near chaos. The Kabul geography simplified things a bit there since most broadcasters would locate on what came to be known as TV hill. However, channel spacing standards were never considered. Kabul has three UHF television stations assigned on adjacent channels.

Further complicating the spectrum issues is the absence of regulations for spectral purity or out of band emissions. Many transmitters operate without output filtering. With most Kabul broadcasters located on the same hill this allows endless options for intermodulation. A spectrum analyzer display on the hill is a scary sight. ATRA was never funded so as to be able to establish an enforcement arm that could ensure compliance with the ITU regulations to which it is bound or even to verify that broadcasters were operating within the limits of their license.

All this is about to change. In the manner of WHTZ,  Afghanistan will go from worst to first. Not having any digital transition baggage to discard Afghanistan can step from the realm of analog transmission technology directly to DVB-T2. MCIT published this month the tender to make the nightmare of hasty spectrum allocation go away.

Rollout and coverage conditions are specified. Eighty percent of the population must be served within five years of license grant. Analog television turn off will occur five years as service is established in each area.

By lagging behind in technology Afghanistan is now poised for a great leap forward. While many Western nations debate what can be done to allow a transition from some intermediate digital stepping stone, Afghanistan will move from the realm of analog transmission to DVB-T2 and DVB-RCT with a single frequency network.

There is some very interesting technology planned on this side of the Durand Line. Tender mercies.

I have always held that some similarities exist between Afghanistan and Arizona. The weather is a pretty good match between Prescott, where I have a home now, and Kabul. Elevations are roughly the same. The same sort of climate comparison holds for Phoenix and Kandahar, where I am working as I write this. I have already made the observation that Prescott is on the opposite side of the world from Bamiyan; 180 degrees apart in longitude at the same latitude.

It appears that what lies below the soil is also similar. Arizona has been known as the Copper State. Afghanistan may come to be thought of as the Copper Republic as its mineral resources start to be exploited. The explanation is from Alexandra Zavis in the Los Angeles Times;

Excavating a future in Afghanistan

This bodes well for the future as foreign funds leave the country with the departure of international troops. There is, however, also a vast historical wealth that lies buried in the soil of Afghanistan. Some of that archeological treasure may be sacrificed as minerals are extracted to aid the modern economy of the country.

The Buddhas of Mes Aynak – trailer

Perhaps these Buddhist artifacts serve as a pointer to the impermanence of this world of samsara.

Dan Rather filed this story from interviews with an archeologist working on the site; 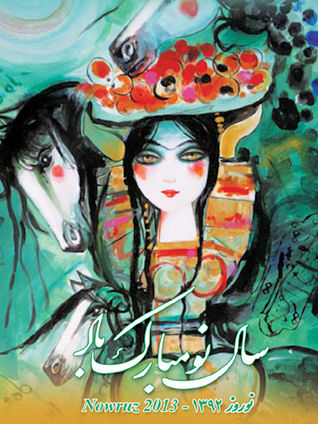 This delightful image was lifted from a poster of the Iranian American Society of New York.     Welcome to 1392.

Saad Mohseni is the Chairman of Moby Group and is typically referred to as an Afghan media mogul. His commentary from yesterday’s Wall Street Journal includes the remark, “But the government doesn’t reflect the views of the public.” It serves as something of an antidote to recent statements from the President and the Ulema Council disparaging the continued presence of Western troops in Afghanistan. His description of the state of the nation and what progress has been made in recent years is at odds with the common Western notions.

This op-ed piece by Mr. Mohseni is very timely;

The Untold Story of Afghan Progress